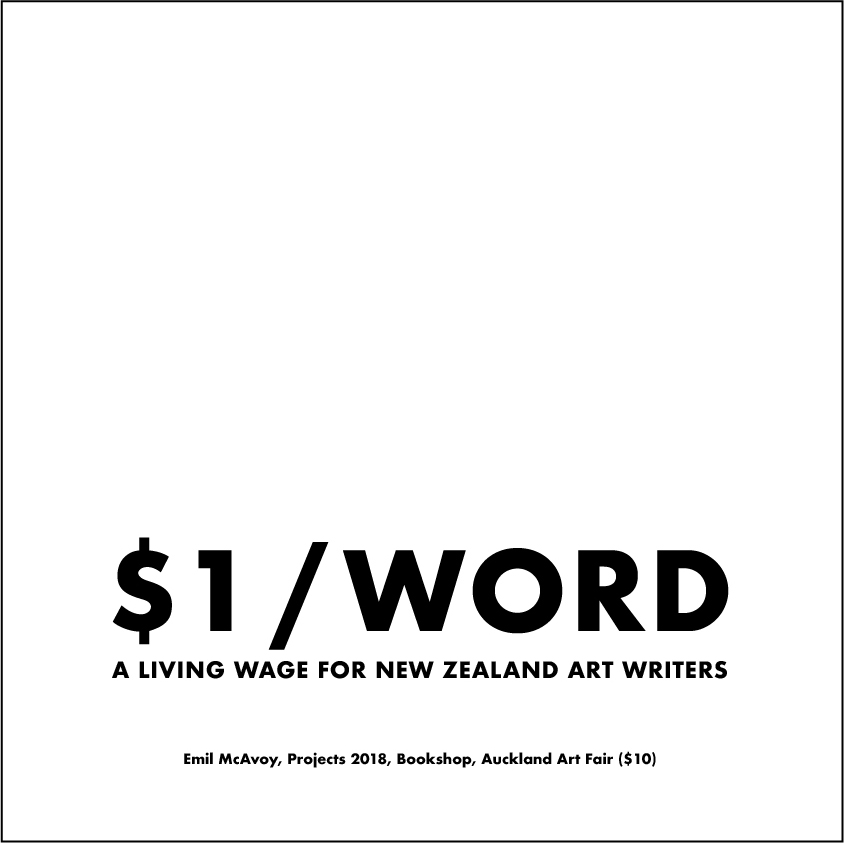 Typeset in Futura by Jonty Valentine at INDEX.
Presented with support from THE CHARTWELL TRUST and WHITECLIFFE COLLEGE OF ARTS & DESIGN.

With $1/Word: A Living Wage for New Zealand Art Writers, artist and art writer Emil McAvoy proposes a fix to the underpayment of writers commonplace in the art industry. The work is a call for action, in league with similar political-economic campaigns, such as the campaign for a universal basic income. Despite the work’s simple message and mission, it raises complex questions about how text and value interact in different contexts, not least because it takes two forms. On the one hand is the announcement, a form traditionally paid for by the promoter and disseminated to the widest possible public at little to no cost to recipients. On the other is the art print, well designed and limited in number, sold to the public as something special.

Of course, McAvoy advocates for writers whose texts are not found in promotional materials or artworks, but in magazines and, increasingly, online – floating round in the ether with no meaningful means of protection. Priced affordably at $10 (one dollar per word in the title), the print functions as a marker of support for the cause. Furthermore, the project invites us to reflect on the value of art writing in abstract/qualitative as well as concrete/quantitative terms. Are art writers mere parasites on the ‘real creatives’, artists? Or, as ROSABEL TAN HAS SUGGESTED, are they more like gut flora, helping to sustain the ‘body’ that is artists and their audiences? If the latter, perhaps the art writer deserves more credit – and less dependence on the credit card.