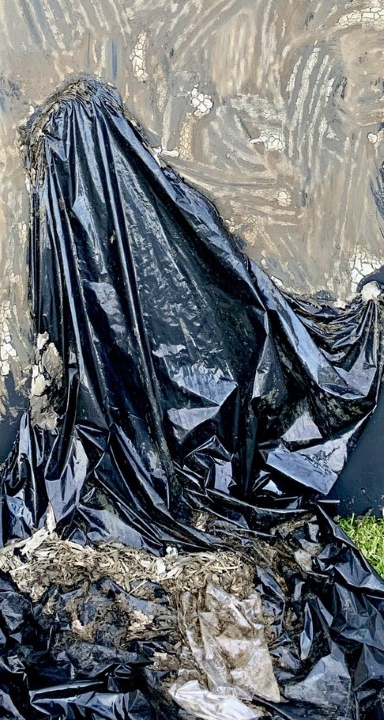 In untitled (2020), Inga Fillary reclaims the landscape as a source of intellectual and sensual delight — using it as both the inspiration and material for a wall painting. Drawing upon a lineage of land art artists — including Andy Goldsworthy, Richard Long and Robert Smithson — along with Japanese Modernists including the Gutai painter Kazuo Shiraga, Fillary has translated these Modernist conceptions of landscape, art, the economy of materials and spontaneity into her own eclectic, contemporary vision of the landscape.

Commissioned by Auckland Art Fair, Fillary’s project was intended to unfold over the course of the fair. Beginning as a blank installation, Fillary in daily performances lasting forty-five minutes would paint the space using soil and other detritus and found objects sourced from natural environments in Auckland. During each performance, additional marks, splatters would be added to the composition, creating a palimpsest of human-made mark making. By repeating these gestures, Fillary intended to fill the space with the seriousness, credence, beauty and occasionally humour that exists within landscapes. In this way, Fillary’s ideas and ambition ripple with a terrific meditation of the fragility of the earth, the human role in its degradation and its importance in affecting the human spirit.

My proposed Project for Auckland Art Fair continues my ongoing love affair with materiality – specifically, dirt. I like the idea of dirt as displaced matter, somehow separated from culture. Cleanliness is almost what makes us human! Hygiene and evolution seem to go hand-in-hand in a way. To clean is to impose organisation on the world, and dirt throws us out of whack by defying this order. I like the idea of being transported beyond our structured society by engaging with dirt – shaking hands with the material, to borrow the words of Kazuo Shiraga. 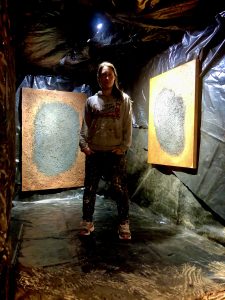